BCCR is a community-based organization dedicated to educating residents and the greater community about the value of diversity, the richness of cultural differences, and the sanctity of human rights.
We believe that all people want a place in their community, for themselves and their family, where they feel, safe, heard, and valued.
BCCR’s community work is guided by the following tenets:
⮚      Compassion
⮚      Teamwork
⮚      Empowerment
⮚      Accountability
⮚      Action
⮚      Collaboration
⮚      Advocacy
​BCCR’s four pillars
​
Education—discussions, forums, lectures, speakers, bystander training, and standouts
Mobilization—for social and racial justice
Creating networks—with individuals, institutions, and other community groups
Influencing all levels of government—speaking out and advocating policy change 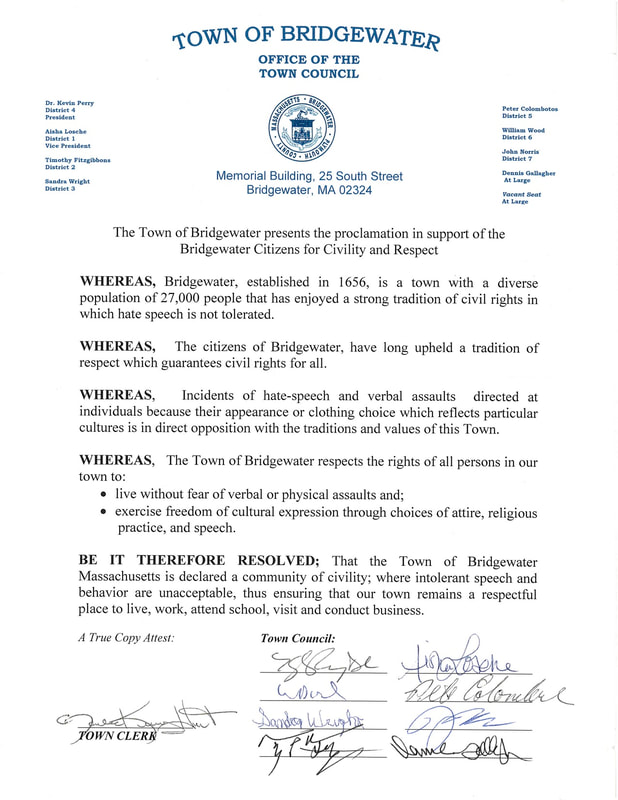 The organization, Bridgewater Citizens for Civility and Respect (BCCR), was established in the winter of 2015/2016, in response to two local incidents in which individuals were verbally accosted in public. The cause of this seemed to be that their appearance and perceived cultural identity was assumed to be Muslim.
BCCR responded by working towards its goal of enhancing and creating an atmosphere of community welcome and inclusiveness so that Bridgewater should be a place of
civility and respect. In the Town, intolerant speech and behavior are unacceptable. The Town remains a safe and respectful place to live, work, play, conduct business, and attend school.
A Proclamation stating these goals was unanimously approved on January 19, 2016, by the Bridgewater Town Council. An enlarged copy of the document was officially unveiled at the Academy Building on March 3, 2017. While deploring the incidents of hate speech and verbal assaults, the proclamation states that:
“The Town of Bridgewater respects the
rights of all persons in our town to:BCCR is now inviting local businesses and civic organizations in Bridgewater to support this effort by displaying a copy of the Proclamation on their premises so that those who live, work, or shop in the town will be reminded about the type of culture of civility and respect that Bridgewater deserves.
OUR NAME CHANGE:
In 2020, after several months of discussion, BCCR changed its name to Bridgewater Communities for Civil Rights.  Three factors motivated this change:u